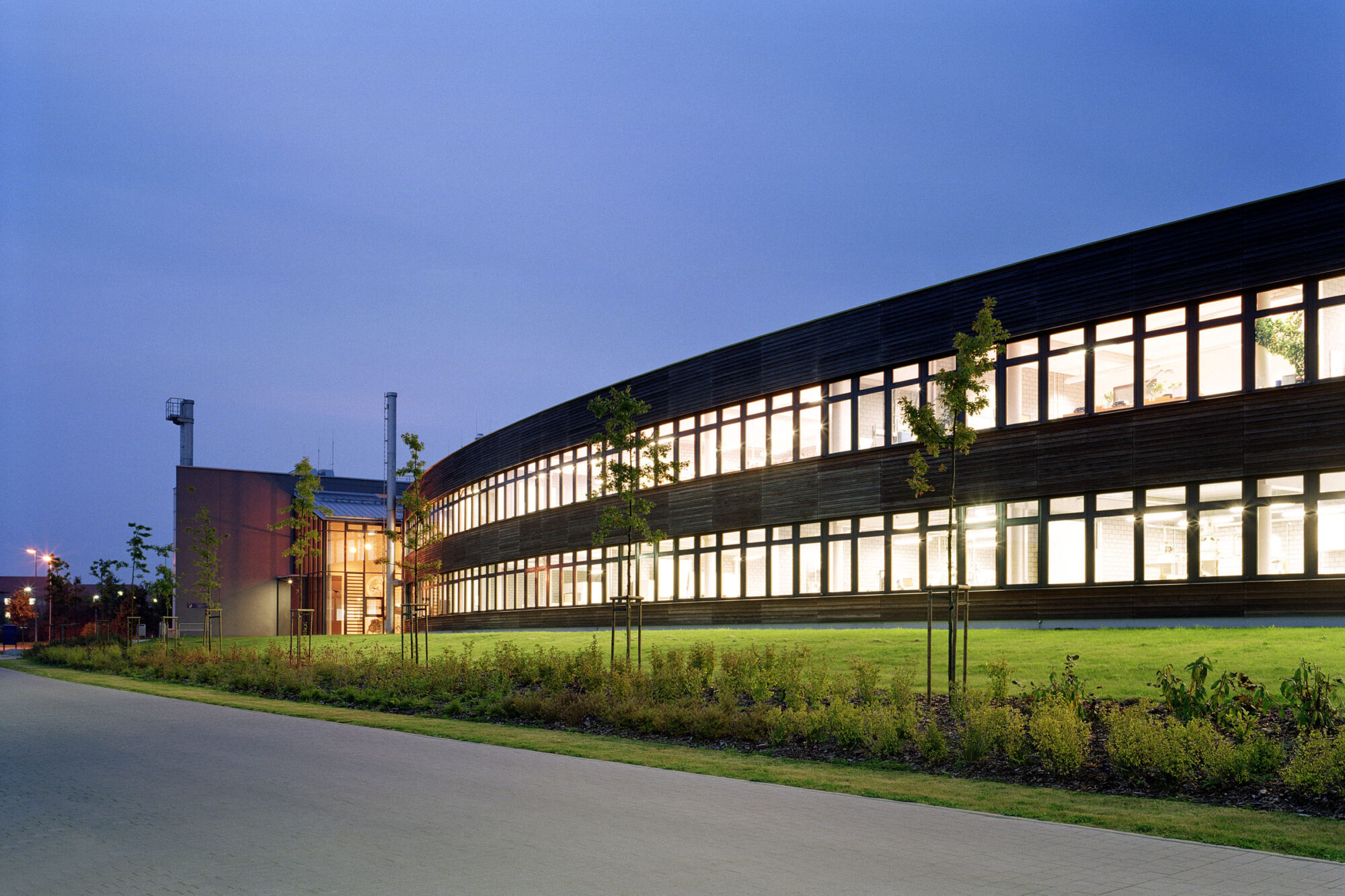 The largest and most modern training facility of the German Navy is located in Parwow on the strait between Rügen and the mainland. Three training and education buildings with a gross floor area of 28,888 m² were built at the Strelasund Barracks.

The “Ship Technology”, “Weapons Technology” and “Civilian Recognised Further Training” buildings represent the central functional units of the Navy’s practical training in the overall complex of the Strelasund Barracks in Parow (near Stralsund). They form a strong urban gesture in the northern area of the site, which is characterised by its immediate location on the Strelasund opposite the islands of Rügen and Hiddensee and by its spaciousness. 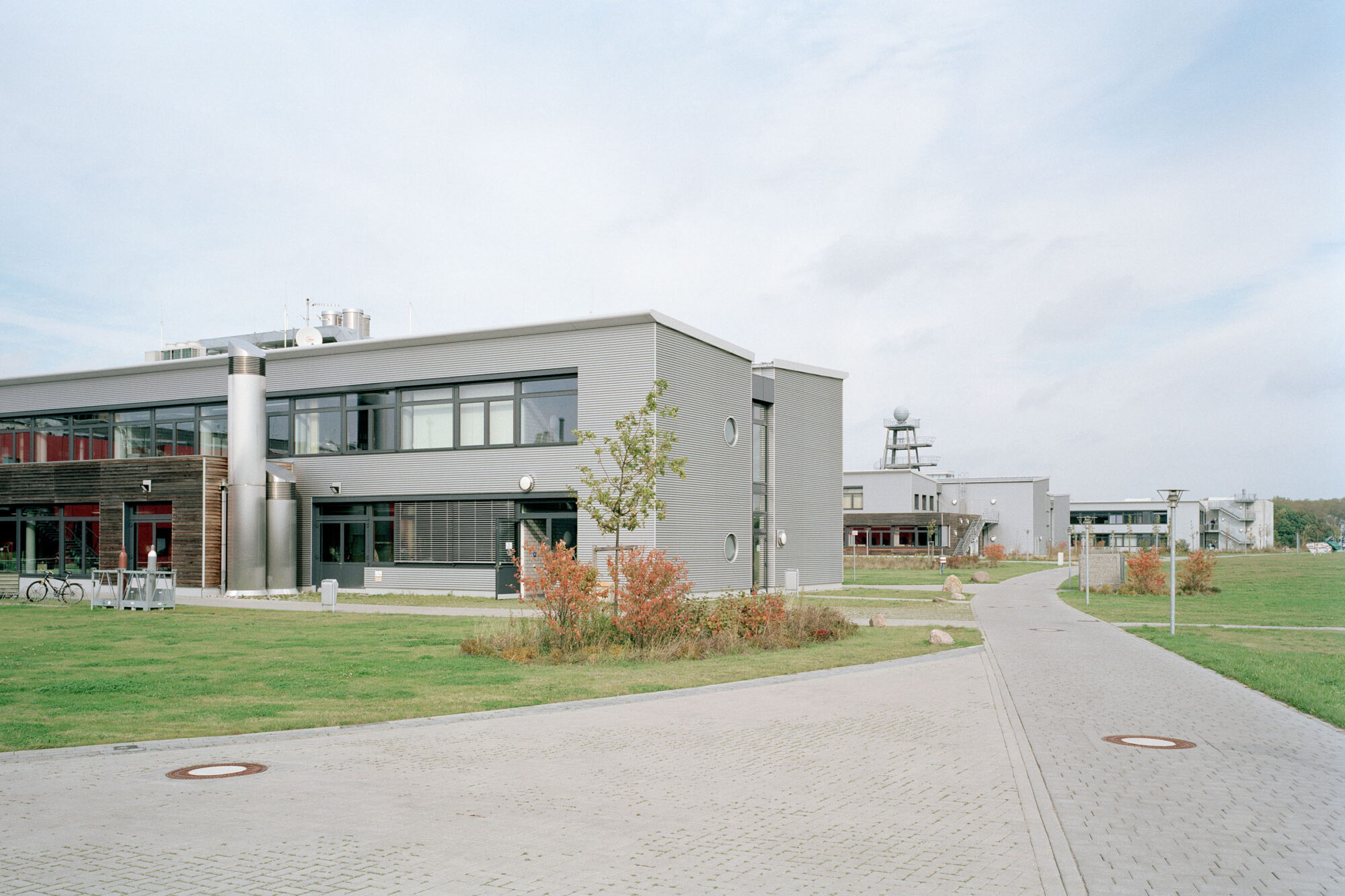 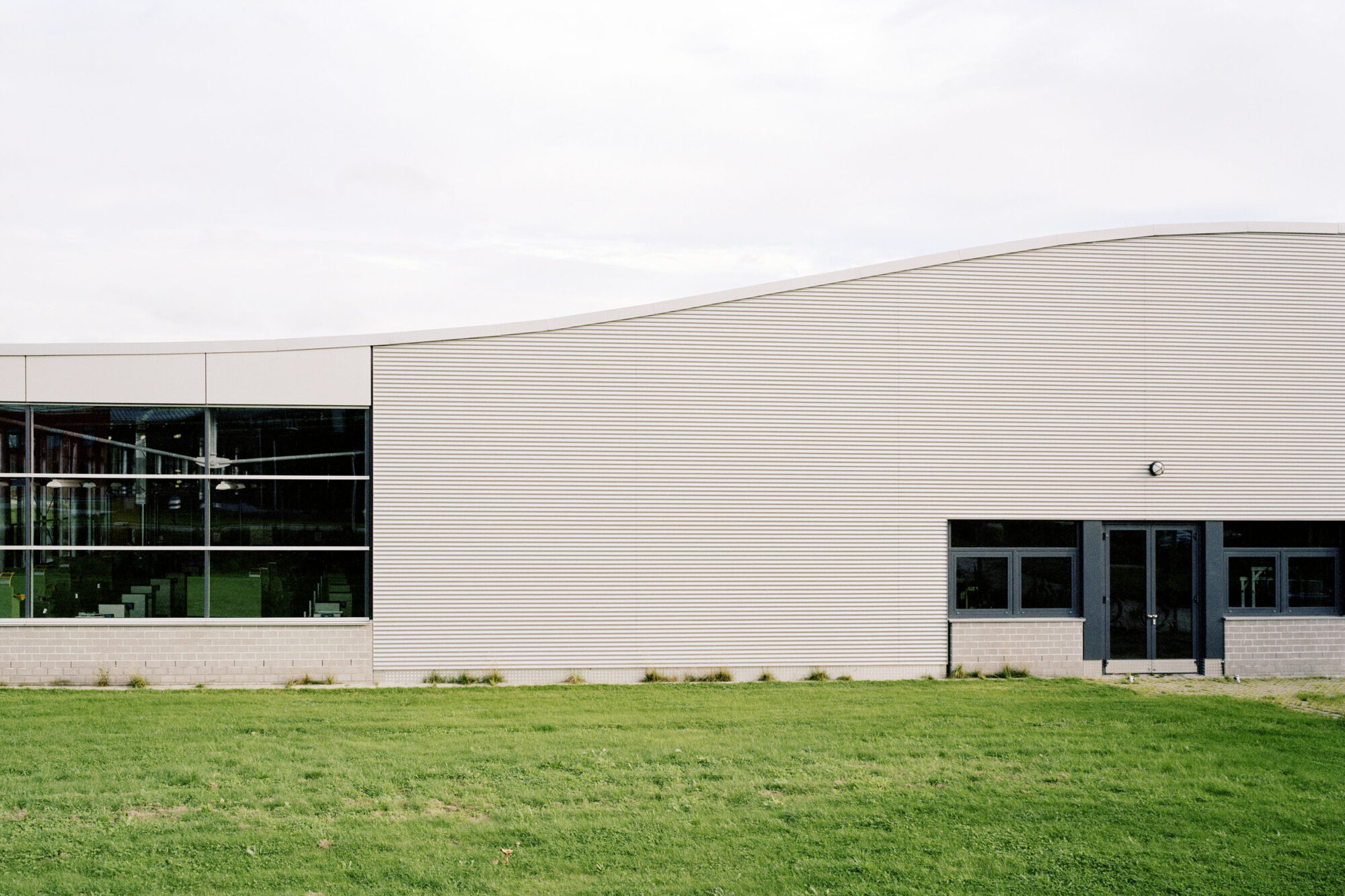 The elongated components of the ship and weapon technology (referred to here as Pier 1 and Pier 2), which are assigned to the access road and the opposite motor vehicle area, predominantly contain the noise-intensive and spatially large functional units of the ship aggregate and gun training. This urban arrangement enables the accessibility of the hall areas as well as the spatial concentration of the noise emission areas within the exercise facilities. The adjacent comb-like building wings in the south-western area (so-called boats 1 to 5) thus remain largely unaffected by functionally related noise emissions.

Along the halls, parallel to the street, a corridor opens up the building complex. At the same time, it serves as a buffer between the noisy areas in the northeast and the quiet areas, the orthogonally arranged boats 1 to 5, as well as the adjoining generous open spaces in the southwest of the building site.

Parallel to the pier halls, on the opposite side of the main corridor are two-storey buildings (so-called “boxes”) containing training units and service rooms.
The comb-like structures of the “boats” form intermediate courtyard-like open spaces with a view of the naval port, the Strelasund and the Baltic Sea. 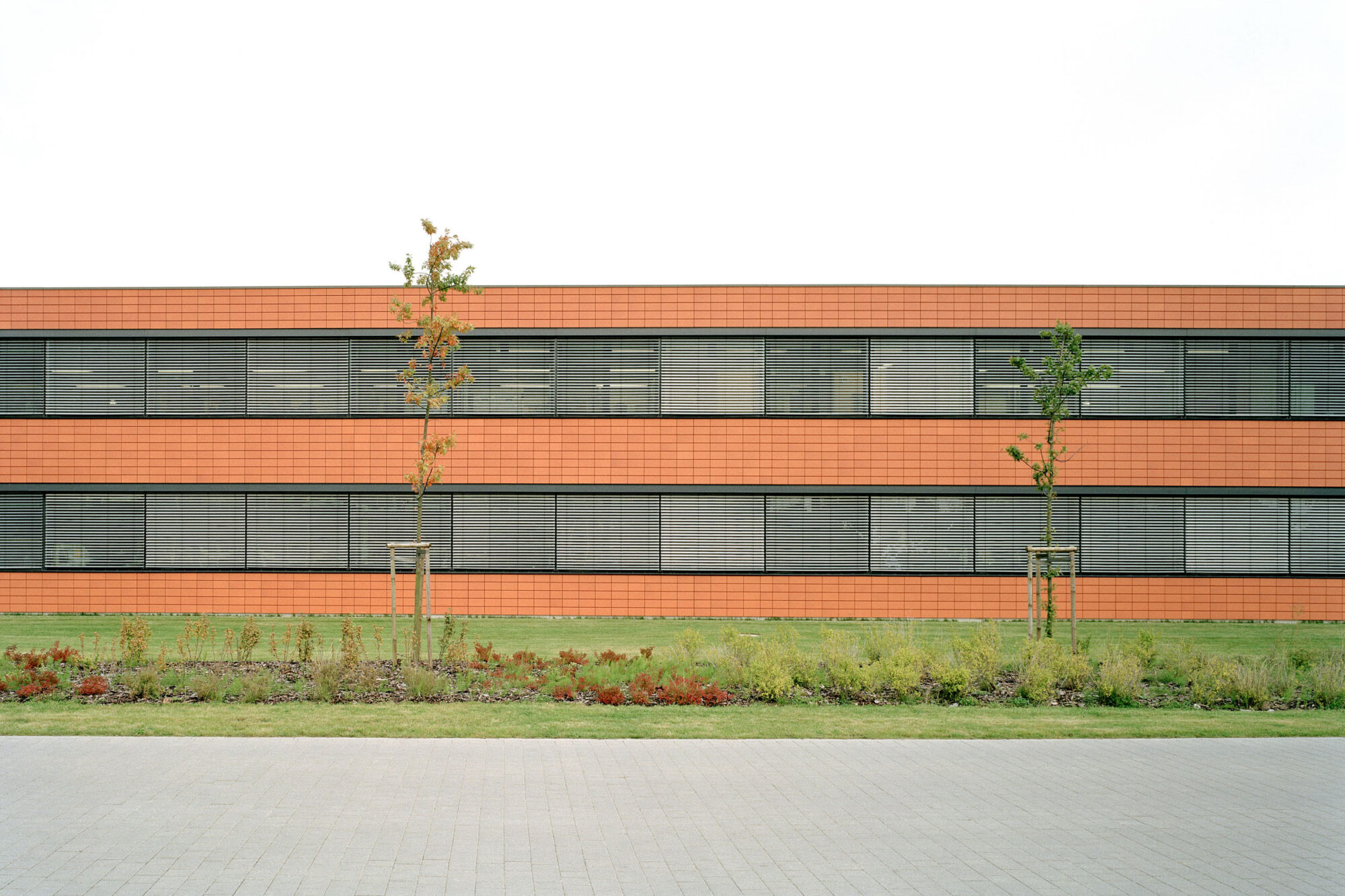 The interior fittings are limited to a few functionally different materials such as ashlar, linoleum, wooden plaster, wooden doors and wooden-aluminium windows. The targeted use of wood in the interior thus forms a striking contrast to the exposed surfaces of the interior concrete and exposed masonry walls.

The arrangement of the individual functional units along the corridors alternating with floor-to-ceiling glazed corridor sections creates high-contrast daylight conditions, exciting visual relationships and easy spatial orientation. Light domes in the corridor roofs and openings between the corridor ceilings and partly in the corridor walls to the exercise halls reinforce the spatial effects. 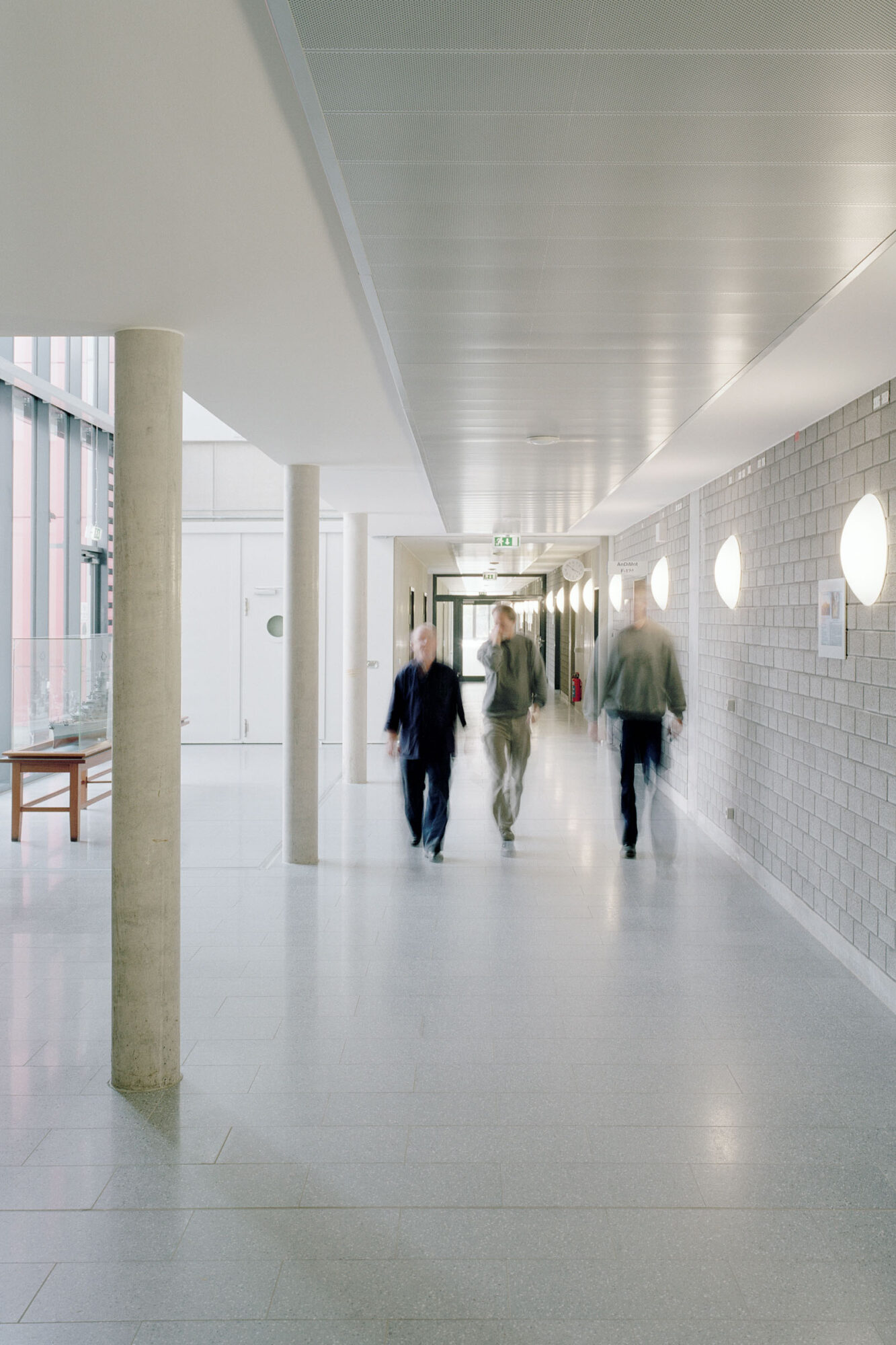 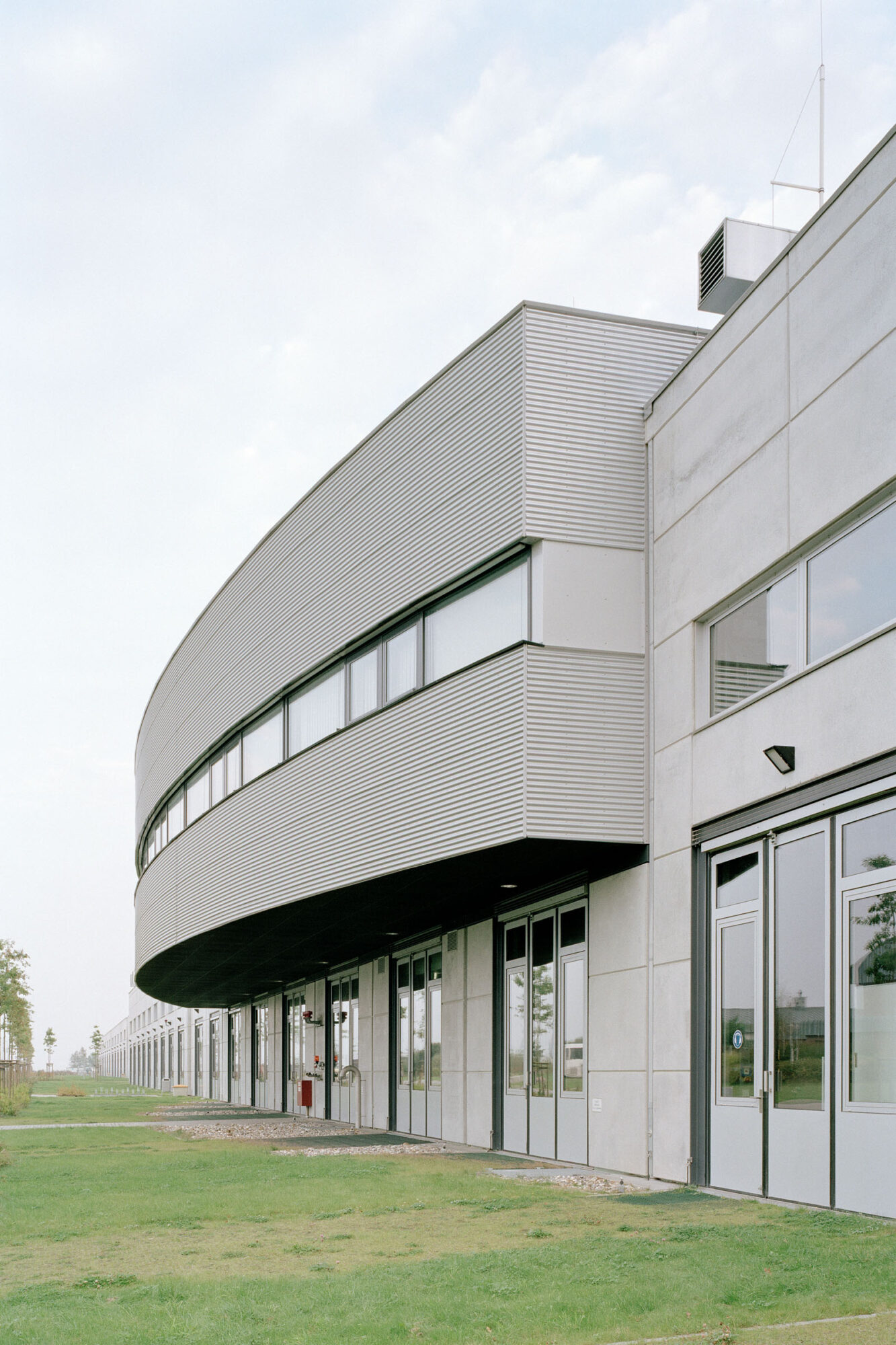 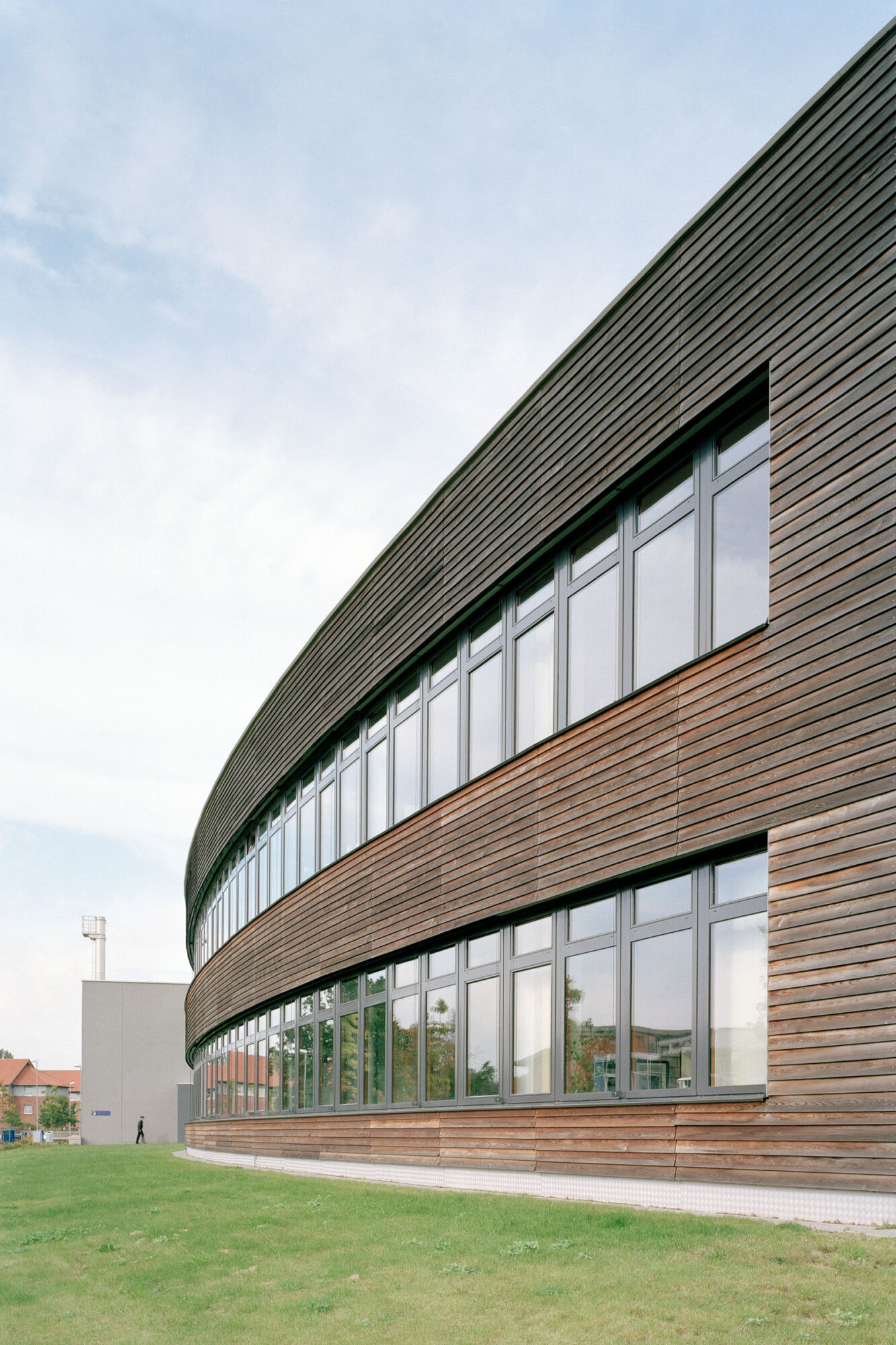 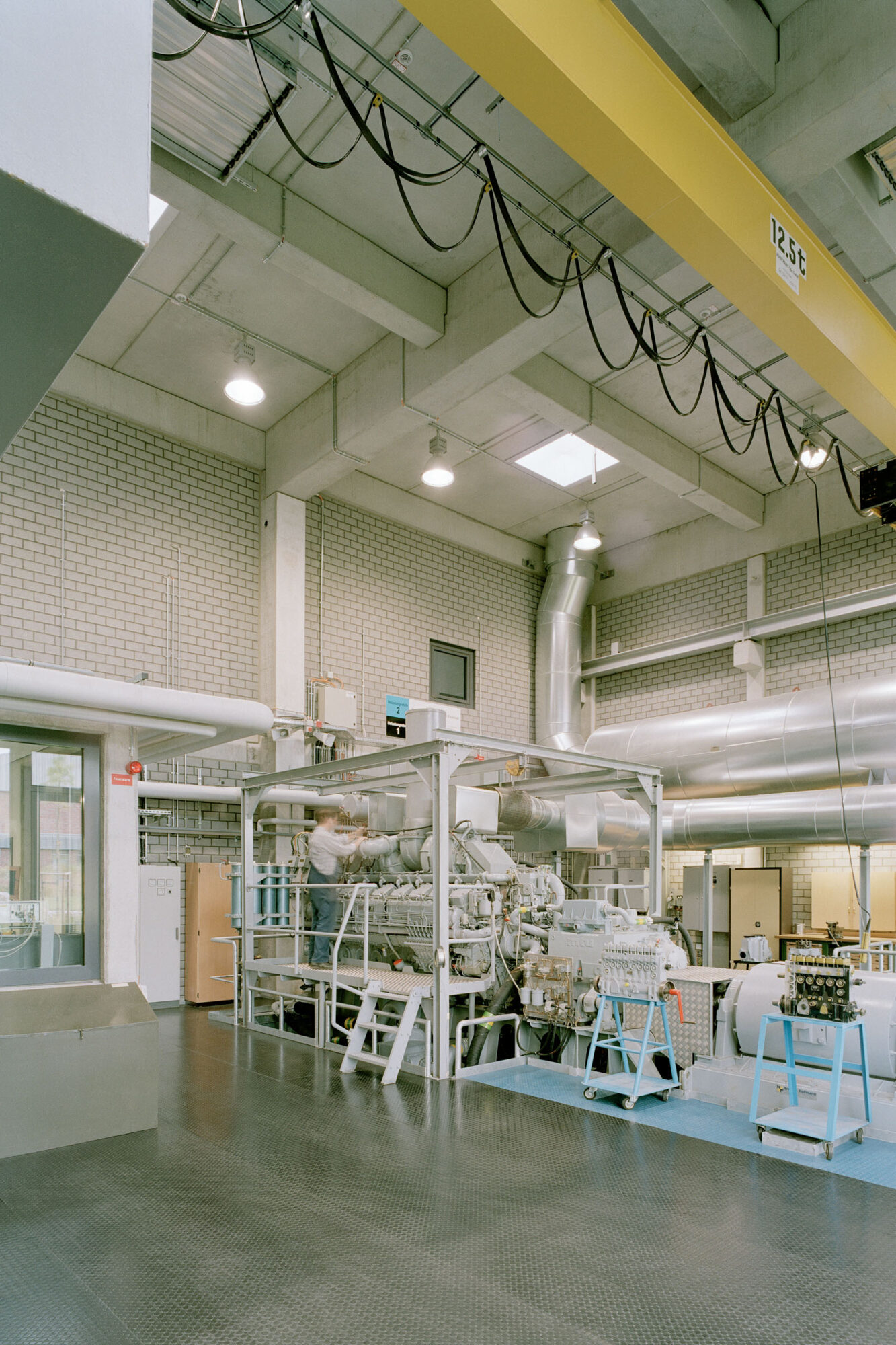 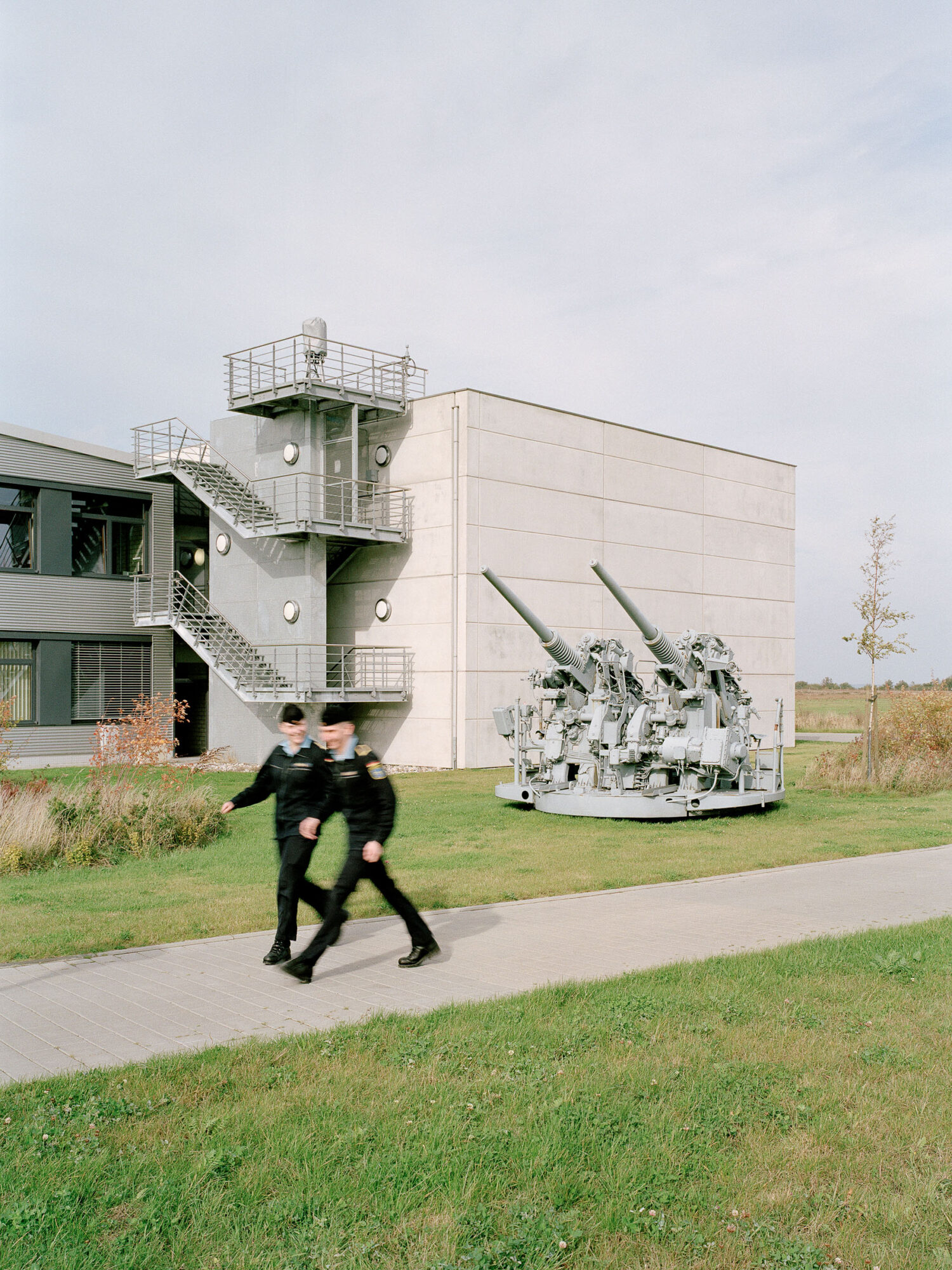 When selecting the materials for the building envelope and their surface finishes, emphasis was placed on creating visual legibility in keeping with the character of the training units. Despite the large building lengths (approx. 300 m x 80 m), the interaction of the building structure with the different façade materials manages the “balancing act” between readability of the structures and contents and simple spatial orientation within the building complex.

The choice of materials was made in consideration of an economically sensible and ecologically justifiable use of materials and offers a harmonious overall impression despite all the intended contrasts.
The “pier” areas with the exercise halls lined up next to each other present themselves as the “backbone” of the buildings through their strict façade structure of exposed concrete sandwich prefabricated parts. The opposing “boxes” with their bright red metal cladding form an intentionally playful contrast, which is also clearly perceptible from the inside through the intervening glazed corridor sections.

The façades of the “boats” are characterised by the alternation of the materials aluminium corrugation and wooden inverted cladding. The metallic surface of the aluminium corrugation characterises the rectangular basic shape of the building. This contrasts with the warm natural wood surface of the façade areas with untreated larch inverted cladding, which characterises all building areas that exceed the rectangular building base form for functional reasons. This creates an interplay of building sculpture and material change.